Drinking water in several regions of the world contains geologically sourced heavy-metal arsenic in concentrations that are harmful to humans.  Aqua Clara International has been evaluating processes and engineering structures to formulate cost effective systems that remove arsenic contaminants from drinking water sources. The ACI technique involves both filtration and adsorption and methods which, in turn, permit both bacterial and all heavy metal contaminant reductions in water that are superior to the presently accepted, universal standards.  And, these selected systems are more cost effective than alternatives.

Based on this laboratory development work, two water purifier systems for arsenic contaminant reduction have been designed, constructed and are operating in the field.

A Household Filter + As, first installed in 2010 in the La Carona region of Nicaragua in collaboration with El Porvenir.  There are now 19 filters installed and providing arsenic-free  clean water for a group of  families living in an area where arsenic contamination ranges from 30-60ppb.

A Facility Filter + As system that incorporates a sand-prefilter, a 15 μ  roughing filter two 10” 0.2 μ hollow membrane filters and our arsenic remediation media. The sand pre-filter and roughing filter remove the normal water borne contaminants found in surface waters, eg, parasites, worms, sediments, fungi, and plant species, prior to the adsorption and removal of arsenic ions from the water to be purified. The two hollow fiber, 0.2 μ membrane filters that are placed in series essentially eliminate the bacterial pathogens and the general level of bacterial species; the actual reduction in such species via this design is log 6 (99.9999).

ACI installed an ACI hollow-membrane and Facility Filter + As while training local engineers in the village of Llano de San Francisco, Querétaro, Mexico. The village is located in the mountainous Serra Gorda region nearest the town of Pinal de Amoles. Due to the high amounts of arsenic in their water from one of their main industries, mining, the government has had to temporarily deliver clean water for the villagers to consume. This filter is one of several to be installed because of the continued high arsenic rates in this area. The work could not be done without the synergistic help of the people of Mexico. Together with the Universidad Autónoma de Querétaro, CONAGUA, and local government health officials this work is being done. 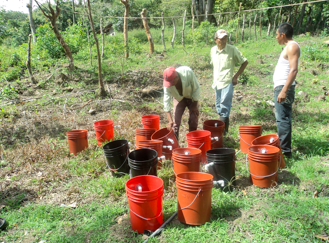